The True Benefits of Being Vegan 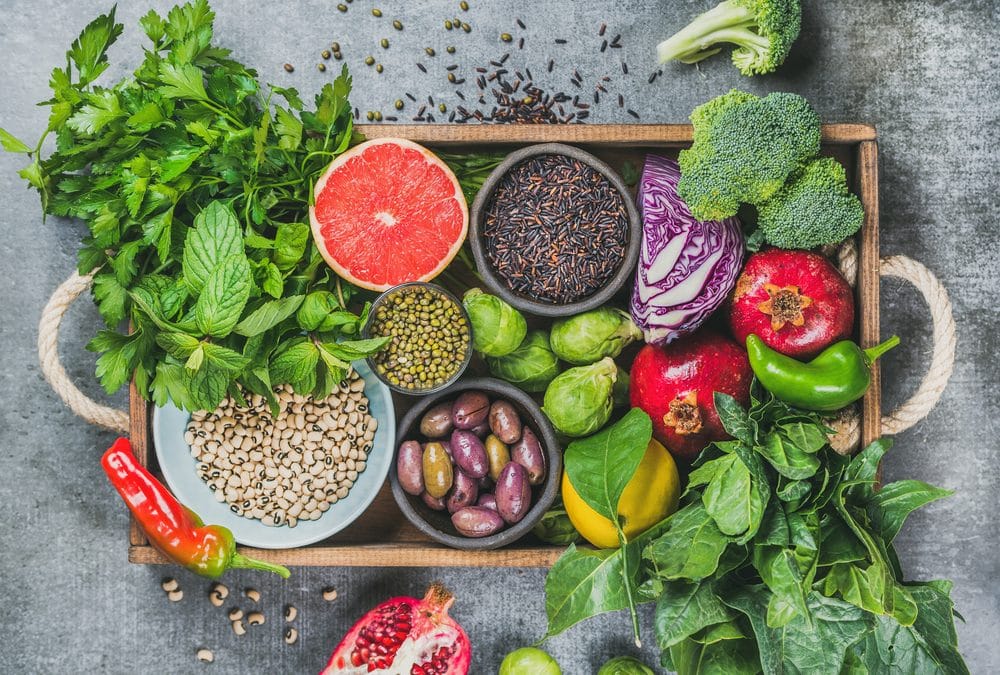 Plant-based diets are sweeping the nation as more individuals swear off animal products for good and realize the benefits of being vegan. Whether it’s health, environmental consciousness, or animal welfare, the reasons behind making the switch are powerful. If you’ve ever considered adopting this lifestyle, but still have reservations about it, then it is important to ponder why this diet speaks to you. Maybe you simply want to lose weight or eat healthier, maybe you’ve heard about where your meat really comes from, or maybe you’ve seen a documentary explaining the financial benefits veganism has for society as a whole. On the other hand, you’ve surely heard dozens of arguments against going vegan. What are the health benefits of being vegan? Does it really make an impact on the country? Can meat and dairy really be that bad? This article aims to answer these crucial questions and several others with nothing but fact. Here are the true benefits of being vegan.

Studies continually show that a meat-based diet comes with a price to your overall health, whereas the plant-based alternative helps to combat disease. Choosing to put down the pork and pick up fresh fruits and vegetables provides your body with a better source of nutrients. Making the switch does not involve a lack of vitamins or protein, as many critics claim. It actually does the opposite by providing an abundance of these nutrients without the cholesterol and saturated fats. Not only that, but the health benefits of being vegan include reduced risks for:

The vegan diet is an excellent way for anyone with these conditions to combat them, as well as a great option for prevention at any age. The diet forces you to pay attention to what you eat in order to get all of the nutrients you need, too. In this way, you’ll be eating healthier than ever before.

It’s Good for the Environment

While it is true that eating meat was essential for the survival of our ancestors, the same simply cannot be said today. In fact, the rate at which the world is currently cultivating and producing meat products is putting an intense strain on the environment. The UN released a report in 2010 encouraging the world to move away from animal products and focus on a more plant-based diet. Cattle rearing alone produces more greenhouse gasses than all the cars in the world. The problem stems from an ever-increasing population. Looking at the meat industry from an environmental angle reveals an unsustainable future. Animals raised for food production are consuming over half of the world’s crops, new farmlands are responsible for 60% of worldwide deforestation, and water safety concerns arise in every country where the meat industry continues to expand. Meanwhile, nearly 800 million individuals in the world are malnourished or starving even as this industry grows. The lack of sustainability is evident, whereas production of foods found in plant-based diets not only provides a safer alternative for the planet but can easily feed the masses.

Aside from the harsh impact on the environment through both expansion and fossil fuels, upkeep of the meat industry requires an astonishing amount of resources. Every year, countless dollars of  taxpayer’s money is wasted on disease control from inhumane environments and enforcing regulations that companies continually fail to follow. The money spent to maintain these inspection-failing establishments could be spent on everything from feeding the poor to infrastructure. Furthermore, this blatant waste of resources continues to have an impact on your own wallet as the price of meat rises each year.

The definition of animal welfare changes every year, with a major concern today involving antibiotics. Aside from the dangers these chemicals pose to humans; evidence shows that antibiotics also alter the growth of everything from cows to chickens while deforming their outward appearance. Removing these antibiotics is not only humane but holds a significantly beneficial impact on the economy. Whichever of those two peaks your interest the most, there’s no denying that veganism is by far the better choice for animal welfare. While this specific benefit may come down to a question of morality, the truth is that animals are abused throughout the vast majority of the meat industry. This goes above and beyond killing them for their meat, stepping into the realm of how these creatures are treated during their existence. Countless documentaries and organizations have exposed the practices that take place in putting meat onto grocery store shelves. Even Rolling Stone had something to say about it in one of their published articles titled The Belly of the Beast (WARNING: This content is graphic). To meet the demands of a larger population, companies have shifted from open range farms to more factory-like conditions. With it comes a mentality that offers no concern for animal safety or well-being. If that doesn’t bother you, then look at it from a health and business standpoint. A lack of care for these animals creates an environment where disease can spread quickly, leading back to the number of resources spent on constant cleanup and maintenance when these inevitable viruses begin to spread. While efforts are made to contain these outbreaks, tainted meat is constantly found in restaurants and grocery stores. How many times have you heard about a recall on the news in the past year? Salmonella outbreaks and several others are constant threats to American society.

There remains a large portion of the world who continues to make arguments against the vegan lifestyle. While they may be founded in good intention, the majority manage to be invalid or irrelevant.

Humans Were Made to Eat Meat

It seems like common sense, right? After all, mankind has been eating meat since the dawn of time. While our bodies can digest meat, we are not carnivores by any means. Here’s why:

None of this makes us herbivores, but it does make us frugivorous. In other words, we were made for a vegetable-based diet that includes seeds and grains.

The Diet is Not Nutritious

If you sat around eating junk food and called it vegan, then this would be correct. However, a plant-based diet is proven to provide not only better sources of nutrients, but more of them. There’s no denying that the vegan diet is a healthy one.

Animals Would Overpopulate the Planet

This sentiment can again, seem like sound logic. The truth of the matter is that animal population, at least in livestock, are only continually growing due to intense breeding operations practiced by the meat industry. This touches back on the impact the industry has on the environment. Creating fewer animals for consumption would lower the population of these species significantly, eliminating the problem posed by anti-vegan critics. This argument also ignores the environmental benefits as well as the ability to end the hunger crises by feeding less livestock.

Farmers Would Go Out of Business

While it might be true that the mega-corporations comprising the meat industry would lose money, smaller farms would once again have the chance to thrive. While we do not support animal agriculture or the use of animals as food, small scale farms are less of a detriment to the environment than large scale animal agriculture productions.

Veganism Is Too Expensive

If you only took soy-based meat substitutes and vegan dairy products into consideration, then yes, a vegan diet can become quite expensive. These products are mostly comparable in price to their meaty counterparts and are not affordable options for everyone. The same isn’t true when it comes to the cost of produce. A simple walk through the grocery store will prove that vegetables, fruits, seeds and grains all cost significantly less than a pound of meat. A healthy vegan diet involves a lot of cooking, as do most, but that saves money. Depending on processed pre-made meals will always  be more expensive than cooking meals at home.

The Truth About Veganism

When it comes down to it, the vegan lifestyle is healthier for your body and the environment. It makes better use of the world’s resources, can contribute to the solution for famine, and is better for small business as well as animal welfare. Now that you know the facts, will you make the switch?