Is Soy the Way of the Future? Get the Facts 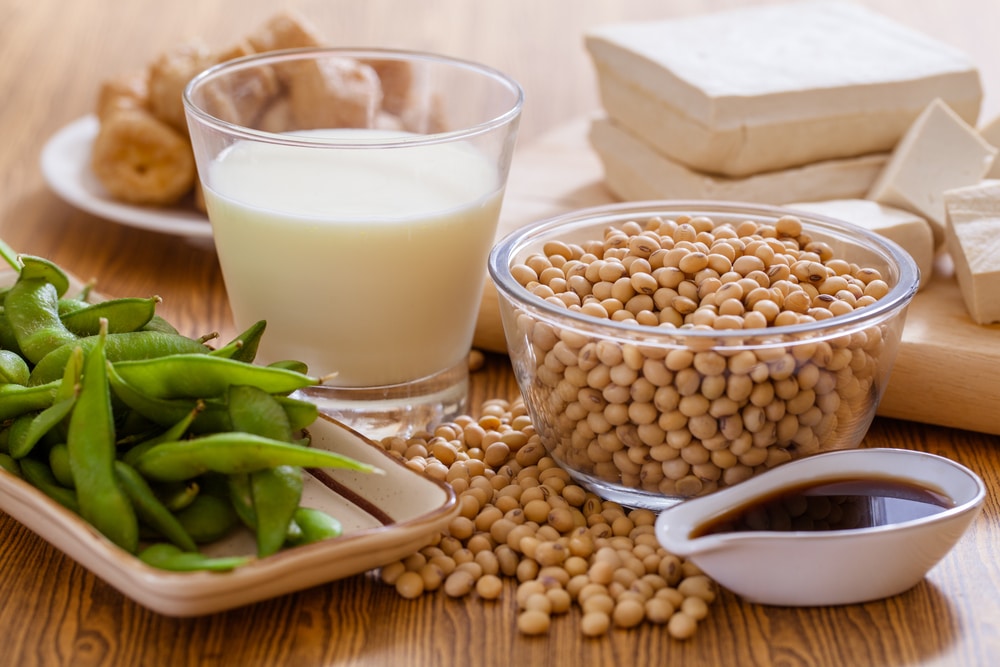 Soy is a mainstay of many East Asian diets and is a vital food for many vegan and vegetarian diets. It has been touted as a superfood that can replace animal protein in a sustainable way that benefits the environment. But why is soy so special? How can it help our health? Is it safe? Let’s explore these answers and look at some of the best sources of soy and how you can get it into your diet.

The soybean is a legume native to East Asia. It has been consumed for thousands of years; since before recorded history. Not only was it a highly nutritious staple food, but the crop was also beneficial to the process of crop rotation as well. Soy traveled throughout Asia during the age of discovery, sold by European trading companies. It wasn’t until the 18th century that soybeans made it to the New World, and not until the 20th century was it considered food for humans. Before this time, and still to this day, it was grown as food for livestock. Throughout the early 1900s, Americans began to see the value of this “golden bean” and its high nutritional content. Today, the United States of America is the largest producer of soy in the world. Most of this soy still goes to animal feed, but people are beginning to come around to the many health benefits of this humble bean.

The Benefits of Soy

Many of the healthy vitamins, nutrients and compounds found in soy aren’t exactly rare. They are present in many staple foods already both in the West and the East. However, what is special about soy is the amount of these nutrients and the fact that you can get them from a plant as opposed to an animal. Therefore, many of the harmful substances in animal products like fat and cholesterol are in low amounts or absent altogether.

One of the best arguments for soy is its high protein content. Protein is vital for human bodies to function. Without it we lose energy, muscle mass, experience lower metabolism and put ourselves at risk of health complications like diabetes. One of the quickest and most common ways to get a lot of protein in the diet is to eat meat. Keeping a high protein level in your body is thought to be difficult without resorting to animal products like milk or meat. Or rather, it was. Since soy is so high in protein, it is used as a meat substitute. Perhaps you have heard of “tofurky” and the other creatively named soy-based meat replacements. Vegetarians and especially vegans have a much easier time of keeping their diets high in protein thanks to soy. This high protein content can asl help you lose weight. The proteins in soy have everything your body needs, but relatively few things that it doesn’t. Other sources of protein like pork or beef can have high-fat content and are calorically dense, whereas soy provides more protein with fewer calories.

Even for non-vegetarians and vegans, soy has many beneficial health properties. Because soy is so high in protein and isoflavones, a kind of organic compound derived from plants, it has a positive effect on heart health. Heart disease occurs when your arteries become clogged with fats and cholesterol. The proteins and isoflavones found in soy improve the lining of blood vessels and reduces the impact of LDL cholesterol. Just 55 grams of soy a day can drastically lower your risk of heart attack and other heart diseases.

The high protein and isoflavone benefits don’t stop at your heart; your bones also feel them. Studies have shown that soy can decrease the risk of low bone mineral density (BMD), especially in female breast cancer survivors. By preventing osteoporosis and strengthening our bones, soy prevents further, even more severe health complications.

The Risks and Drawbacks of Soy

So, if soy is so fantastic, why doesn’t everyone eat it? Why isn’t it a staple all over the world? Well, first of all, it would be remiss not to mention taste. It may be healthier than meat, but most people would not consider it as delicious. However, despite soy’s reputation for being bland, there are also some serious health concerns in regards to soy. Additionally, its cultivation and subsequent environmental effects have also come under scrutiny in recent years. Here are some of the major points to be aware of in regards to soy’s potential drawbacks.

One somewhat disturbing find involves those isoflavones that are so good for us. While they do help our hearts and bones, they also mimic the hormone estrogen, although in a much weaker fashion. It was shown in a study that high levels of these estrogen mimickers increased the risk of breast cancer in rats. However, it should be noted that the amounts administered to these rats was much higher than any reasonable adult would consume regularly. Furthermore, rats have very different metabolisms than humans so it may not even affect us in the same way. While the possible link is there, there is also no evidence to indicate that regular, moderate soybean consumption increases the risk of breast cancer. Recent data actually suggests that average consumption of soy may reduce the risk of breast cancer in some women.

Soy allergies are some of the most common allergies in the world. They are most prevalent in young children between the ages of three to ten, but many people outgrow the allergy afterward. However, a significant portion of the adult population still retains an allergy to soybean.

Allergic reactions caused by soy include:

Sometimes the reaction results in anaphylactic shock, but cases are rare. In such cases, an epinephrine auto-injector (“epi-pen”) can be used to treat it. Not only does this prevent people who are allergic to soy from consuming it, but it also bars them from eating any product which may contain it. Since soy oil and other common food additives are made with soybean, those who have the allergy must read labels and ingredients carefully.

Soy lecithin is a byproduct of the soy oil creation process. It is cheap, has many of the same health benefits of other soy products and usually does not contain enough soy residue to provoke an allergic reaction. For these reasons, soy lecithin is used as an emulsifier in foods and as a health supplement. However, some studies have caused grave concerns about this compound to arise. Excess soy lecithin in rats has caused decreased brain function, birth defects and the higher risk of breast cancer seemingly present in soy mentioned above. Keep in mind though, that these studies were done on rats, not humans, and in doses not normally consumed by reasonable adults. It may turn out that soy lecithin reduces the risks of these defects in humans as what seems to have happened in the possible breast cancer link. Soy lecithin appears for the moment to be safe to consume moderately but beware of excessive dosing with health supplements, which are not regulated by the FDA.

All evidence suggests that regular yet moderate consumption of soybean is excellent for your health. So how do you get these benefits without having to munch beans all of the time? Luckily, soy is very versatile thanks to its high protein content and can be consumed in a variety of ways.

A Super Food, When Eaten Properly

Soy can form the backbone of a vegan diet, and even change a non-vegan diet into a much more healthy one. Its high protein and low-fat content make it an attractive staple food while also containing isoflavones and their many health benefits. Like everything else, however, soybean is best in moderation. There is no evidence to suggest that responsible soy consumption can be harmful to you, but too much of anything can be a bad thing.